skip to main | skip to sidebar

At sunday we drove with the bus to Granada, our inspiration was to visit the Alhambra.
As we arrived their we saw a lot of people with skisuits, a quite weird sight considering the fact that the sun was shining. After a few moments we distinguished the reason: high snow-capped mountains.

We drove with the line 33 to Granada-City and then with a touristbus to the Alhambra, we were in a hurry, because we had tickets for 11 o'clock.
The Alhambra is an overwhelming building because of its decoration at the ceiling and the walls. 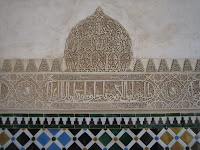 We needed about two hours for sight-seeing the Alhambra. After that we went to the old city of Granada, there are a lot of people who want to earn money with selling balloons or something else. In each corner of Granada are gift shops for tourists. 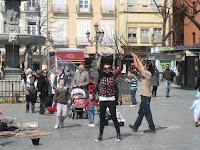 To take nice photos of the Alhambra we went to the compared mountain, called Albaicín.
At the outlook, there were a lot of people taking photos with the impressing mountains in the background. 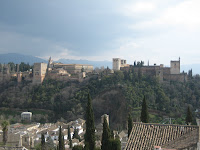 At 19 o'clock we finished our excursion and drove back to Malaga. As we received our residence we were so tired that we immediatelly felt into our beds.
Posted by the germans at 10:33 AM No comments: Links to this post

In our first week, we made a lot of interest activities:
We get to know nice bars for example "ElPimpi", in which we ate a lot of delicious tapas.
Furthermore Sergio and his wife showed us a cafe to ate "churros" with chocolate, a typical food of spain. Following we went to a museum of art and look a art exhibition.

On the first wednesday we went to a little restaurant to ate gambas, it was very funny because it was for some of us the first time to breack the gambas out of their cups. Furthermore we went to an nice bar with a lot of vine, there we tasted a typical vine with the taste of dried grapes.
On thursday we went to eat paella with Mr. Sorger in El Pelo. The restaurant was very near to the sea and the atmosphere was great.
Posted by the germans at 9:59 AM No comments: Links to this post

At Thursday Markus and Christine had the chance to visit a fablous place in the mountains called "El Chorro". 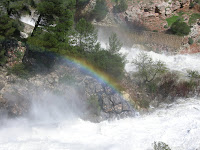 We drove with the car to the mountains and on the way we heard music of german carneval, this was very funny.
Arrived at "El Chorro" we went through the forrest. On the way Sergio and Juan Carlos showed us plants which we ate, for example wild asparagus.
At our destination we were amazed of the water. The little brook was a torrential river and the water crushed into a canyon. It was very overwehelming! We was there for an hour and looked the torrential water.
After that we went through the forrest back to a restaurant and ate typical spanish tapas, for example wild asparagus with eggs and bacon. 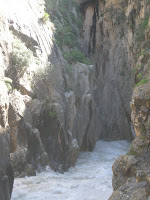 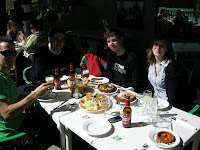 Posted by the germans at 11:28 AM No comments: Links to this post

We met Sergio at the IES Campanillas School, the workplace for Christine and Markus. He showed us the room where we had to work for the next weeks.
Before we took the Bus to the technology park we had one of the best coffee we ever had in the cafeteria of the school.

In the technology park are the companies where Anna and Patrick have to work. 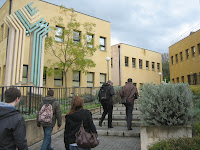 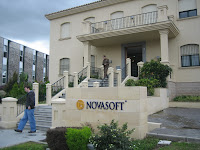 Anna's company is called "Indiesoft" and Patrick's is called "Novasoft".
In the technology park we watch the P.T.A., which is a second building of the school. There, Sergio show us some lessons and after that we made a little break in the novasoft Restaurant, there we drunk the best Orange juice.

The last company we visited was Jan's. 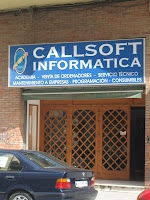 His company is in center of Malaga. The company is called " Callsoft".

You can find a detailed description of the companys on the right side of our blog.
Posted by the germans at 10:33 AM No comments: Links to this post 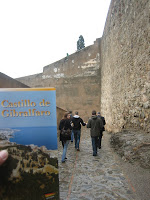 We met Mr Sorger at 11 o'clock. He wanted to make a sightseeing tour with us. We went through Malaga and visited "Castillo de Gibralfaro" an old castle.

We walked on the old walls and after we reached the top of the mountin we had to eat some tapaz and drink a beer :-).

From the top of the mountin we made some beatiful photos of Malaga and the harbour.


The weather was not that good, sadly. 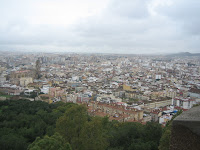 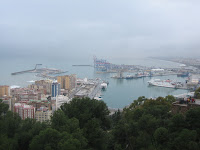 Posted by the germans at 1:01 PM No comments: Links to this post

The housing is in the historic center of malaga in a small street. The first thing we did was to check our rooms and than it was time to chill :-) 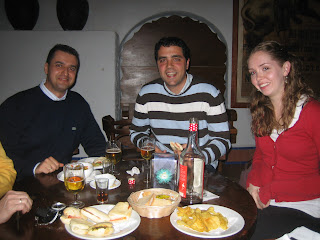 At 9 o'clock we met our teacher, Juan Carlos, Luis and Courtney to eat some tapaz and have a drink.
They showed us some interesting places for example the "el pimpi". A very nice bar with good tapaz and wine.

This was the end of our first day.
Posted by the germans at 10:59 AM No comments: Links to this post

the germans
We are 5 students from Germany near Cologne. We took the chance to make a training in Malaga (Spain). We are two girls an three boys: Anna, Christine, Markus, Jan and Patrick.